The running case study in this tutorial centers on state bar passage rates on the bar exam. After graduating law school, all law students must pass the bar exam prior to gaining their law license. It’s the final step on a long journey. The data set contains information on law school bar passage rates - which we’ll aggregate to create state passage rates - and student body characteristics such as median undergraduate GPA and median LSAT score. The LSAT is the admissions test prospective law students take. AccessLex aggregated the data and I placed it on a GitHub repo for easy access.

Formalities out of the way, let’s jump right in.

What are hierarchical models?

We start with a simple question: Which states have the lowest and highest bar passage rates? On the surface, this is simple arithmetic. Just divide the number of bar passers by the number of takers. In a way, that’s all there is to it.

But in another context, it’s trickier. Let’s look at Alaska. In our data - spanning 2014 to 2019 - there are two takers and two passers; a bar passage rate of 100%. Do we assume their bar exam is fluff, and if I took it I would be sure to pass? If a thousand cold souls took it would they all pass?

Framing the issue so highlights what we really want to know. We want to know what we’ll call the hypothetical pass rate with an infinite number of takers. Let’s call this the infinite takers pass rate. In other words, if a gazillion people took the Alaska bar, what percentage would pass? Surely it’s not 100%.

Alas, we can never know this number with certainty. We can, however, estimate this rate, along with a probability distribution of possible values for this rate, with a Bayesian hierarchical model.

The above example highlights the problem, albeit in an extreme form, that hierarchical models are designed to solve. To show how they solve it, let’s look at two extreme ways to estimate a state’s infinite pass rate. First, we can simply say that the state’s estimated infinite pass rate is its real pass rate. We could also create confidence intervals for this rate by sampling from a binomial distribution that only contains the state’s takers and passers.

Let’s call this the no-pooling method since we are not using any information outside the state to estimate the state’s rate. This makes sense on the surface, but the problem is that we are making an estimate based on a limited number of data points: limiting our data to the takers within a state. In a state like Alaska this is a problem because there are only two takers.

At the other extreme, we might assume that the best guess for a state’s infinite takers pass rate is the United States pass rate. This gives us more data since we are using data outside the state to predict the state’s rate. With this approach, Alaska’s estimated pass rate is the US rate of 77%. This approach is called complete pooling because we are lumping all states together.

The benefit of this approach is that it gives us more data. Unfortunately, complete pooling arrives with its own squeaky wheel. States have different bar exams with different levels of difficulty. As a result, we can assume that states will have different infinite takers pass rates.

What if we can combine the best of both approaches? What if we primarily use the state’s own rate, but dip into the US rate to the degree that state data is lacking? This concept is called partial-pooling and it provides the backbone of hierarchical models.

To see how it works, let’s put on our jackets and go back to Alaska. With just two data points, we know almost nothing about it’s infinite takers pass rate. And with this fog of almost-ignorance, our best guess might be the US rate.

But, let’s keep in mind we do have two Alaska test takers and they both passed. This is some evidence. Right? Given this, maybe we move our Alaska estimate a percentage point higher than the US rate? This intuitive thought process encapsulates hierarchical methods.

Partial-pooling works for state pass rates because bar exams share commonalities. Almost all states administer the MBE and it counts as roughly half of the final bar exam score in most states. Importantly, MBE is identical between states. This commonality means that information about one state’s pass rate provides some evidence for what another state’s pass rate might be. The evidence isn’t perfect, however, and that is why we only partially-pool this information.

With this intuitive understanding of hierarchical models in mind, let’s start modeling.

The plot below shows the results from a Bayesian hierarchical binomial model. The model is binomial because bar passage takes one of two values: pass or fail. Bar exam state is a group-level predictor and pass / fail is the response. The blue dots are the state’s actual pass rate, while red dots are the estimated pass rates. The red line represents the 90% highest posterior interval (HPI). The HPI is akin to the frequentist’s confidence interval. In fact, the HPI is what most people think a confidence interval means: there is a 90% chance that the true infinite takers pass rates falls within the 90% HPI.

At this point, our temptation might be to look at the state with the lowest estimated bar passage rate and crown it as having the most difficult bar exam. But, this assumes that states have similar students taking their bar exams. For a host of reasons, this assumption might fail.

We can attempt to control for student quality by incorporating each school’s median undergraduate GPA and LSAT score into the model.

The plot below highlights the correlation between undergraduate GPA, LSAT, and bar passage. The values for GPA and LSAT are normalized to have a mean of zero and standard deviation of one, since this is what we will use for the model. The plot shows that a school’s average GPA and LSAT for its incoming students is positively related to bar passage, so each might be good candidate predictors for our bar passage model. 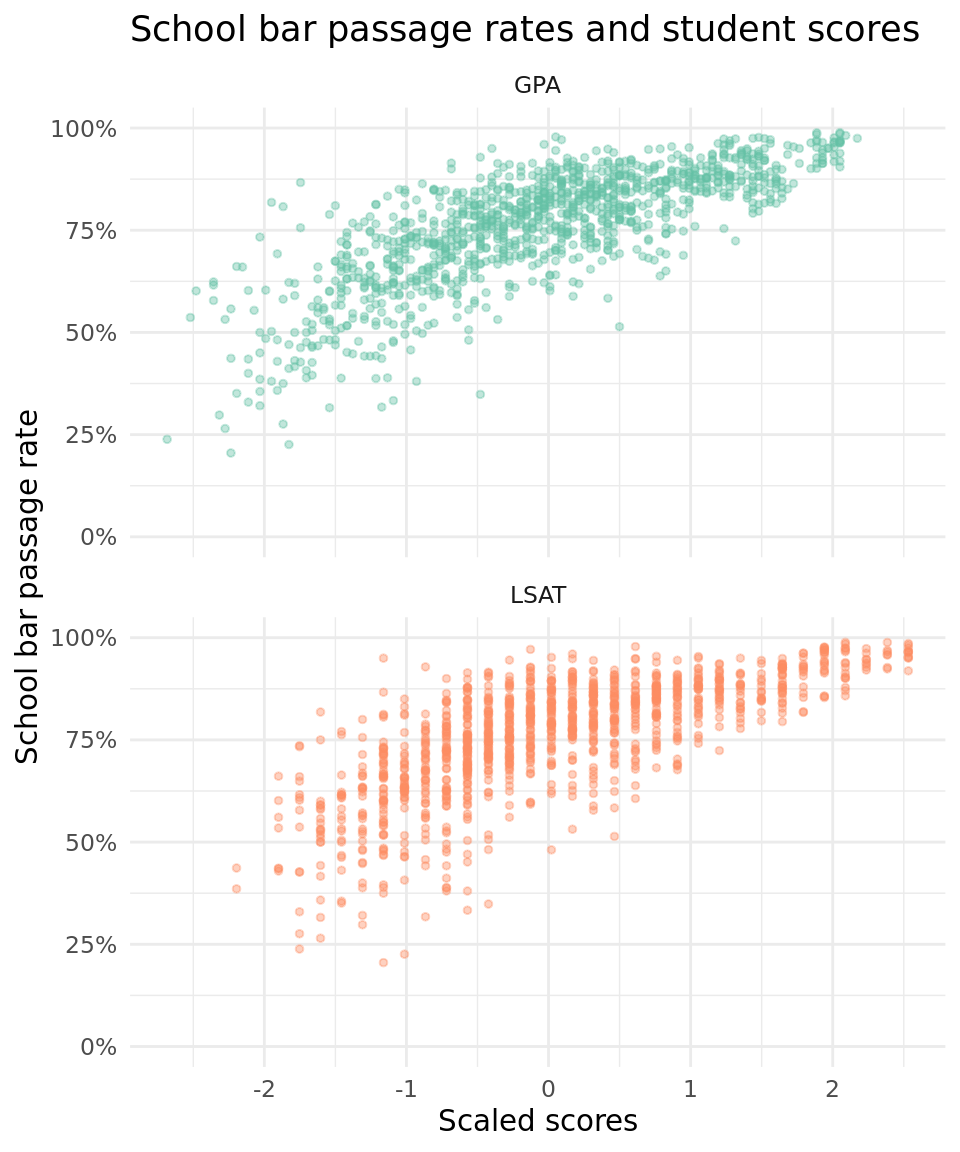 Now, let’s model this relationship by adding the school’s median GPA and LSAT score as additional predictors and keeping state as a group-level predictor.

The plot below shows the posterior distribution of each state’s predicted bar passage rate with all students hailing from schools that have median LSAT scores and undergraduate GPA. The model attempts to make test-taker ability the same for every state. I say attempts because it is using the school’s median LSAT and undergrad GPA, not the student’s. We show the entire posterior distribution to get a better gauge of uncertainty. These rates should give us a better indicator of bar exam difficulty than the raw pass rate because they attempt to control for student ability.

This tutorial provides a 30,000 foot view of Bayesian hierarchical models. They’re great when you have data segmented by groups and those groups share commonalities. In statistics terms, their error terms are correlated. For groups without a lot of data, you can steal information from corollary groups and give yourself more precise estimates with narrower credible intervals. 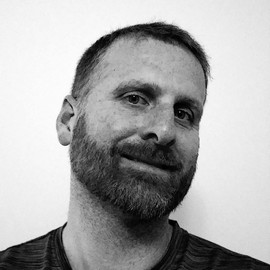 Spent six years playing Army, another three as a lawyer, and finally settled into being a data and programming guy.